Well this goes out to that Artisan among Artisans, Roger Federer. The first time I saw Federer play was in 2001 against Pete Sampras. Sampras was no longer the same. Age had taken its toll but he was still the best server in the game and on grass still the toughest to beat. Federer matched him serve for serve, shot for shot but he was still rough around the edges. Yet it was plain to see that the guy had class. Every moment of his seemed effortless. He didn’t seem to move fast and yet he was. His strokes were hit with grace but had every inch the power that other players mustered. Of course I didn’t make this analysis at the time. I was too busy watching. Eventually Federer did beat Sampras in five sets only to lose to Ivanesevic in the next round but that match showed what a talent this guy was.

Mind you Federer rising was no accident. He had been marked for greatness since winning the Junior Wimbledon. It was only a question of when.

Few would have predicted him breaking all the records set by Sampras though. It was being argued that the number of grand slams won by Sampras was too great and that it would take some time. Imagine then that the record couldn’t even last a decade.

Federer is the only player to reach ten consecutive grand slam finals. The next is a distant four. Imagine the level of consistency that this guy has and the total dominance over the rest of the field. His fitness is an oft ignored attribute. He has never retired from court during a match and he never ever looks tired during a match. Remember the Wimbledon final against Roddick where Roddick was drenched in sweat from head to toe but Federer seemed like he had just stepped out to play even after winning the Wimbledon. The very fact that he can combine such artistry with such consistency is a feat in itself.

The stats can go on and on but they will never reveal the big picture. The stats can never tell us that Federer has perhaps the most complete game of any tennis player who graced the court. He can outgun any baseliner but is a supreme volleyer as well with soft hands and fantastic, almost inhuman reflexes at the net. The disguise on his shots is phenomenal to say the least. Marat Safin commented that the ball seems to stay for the extra second on his racket which makes it difficult to judge where he is hitting the ball. His serve though not the fastest or the most powerful is very effective thanks to its disguise. The very fact that he tosses the ball in the same place no matter where he intends to serve is indicator enough.

Federer also possesses perhaps the greatest shot in the sport, his forehand has been called a liquid whip by McEnroe and rightly so. The power and the accuracy of his forehand is uncanny but there never seems to any brutishness behind the shot which marks the strokes of mere mortals. His dropshot is by far the finest in the game. No one else comes even close. The ball just stops dead in its tracks.

If he has a weakness it is his backhand but what a weakness it is. It seldom lets him down except during the French Open when the ball rises high and the opponent keeps the ball on his backhand side in fear of his forehand but only Nadal has been able to exploit this to great effect. During Wimbledon his backhand is deadly and he is able to strike winners from all over the court from seemingly unwinnable positions. The slice allows him to control the pace of the game and he usually dictates the proceedings.

Federer’s defensive game is top notch as well. He rarely gives away easy points. Even if someone like Potro is powering away he is able to use squash like shots to keep himself in the point and the moment there is a mistake Federer is ready. It takes a lot to beat Federer during the Grand Slams. He has never been upset by a outsider like say Nadal or Djokovic. It has always taken someone in the top five playing out of their skins to beat him in the Grand Slams. .Only Nadal and Del Potro have beaten him in a Grand Slam final.

The thing that separates Federer from the rest of the pack however is the fact that watching Federer play is never boring and always enjoyable. Watching some tennis matches is a drag, almost like they are playing out to a formula, long baseline rallies followed by a winner or an unforced error. With Federer the game seems open and even if he is going through the motions they are so full of grace that you wonder how a guy could possibly move that way. He is extremely light on his feet. He only moves as much as necessary and never seems to overrun the ball. His movement toward the ball is fluid and the balance is amazing.

When Federer plays there are so many what you call Federer moments. The shot between the legs that he hit with his back turned to the net against Djokovic during the dying moments of the US open semi final.  What a shot it was. To hit a winner from that position would have been beyond anyone but Federer. The Wimbledon final in which he had a heartbreaking loss to Nadal produced two of the finest backhand winners one each from Federer and Nadal. 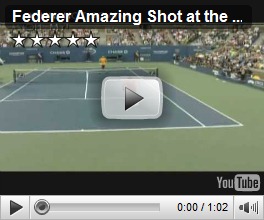 Federer is twenty eight now and it will be tough for him to play beyond 30.  He obviously still has it and I do hope he continues playing for as long as possible because he is the one player who elevates tennis from a sport to an art form.

freakygenius said…
This blog should belong to some sports magazine. Its written so well.
January 3, 2010 at 2:11 PM