Rule 34 by Charles Stross : You will never look at your email the same way again 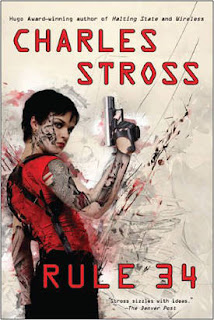 This is one of the great reads of the year(with a terrible cover though). Charles Stross writes a near future police procedural in this one.
Its a future where 3d printers are a reality and plans for printing almost anything are available online(This includes all sorts of weapons of course). This of course leads to a whole lot of materials being smuggled. Its a future where you have to bid to get a bus to go your way. The police instant messages and everything has gone digital. The rise of the internet has lead to an increase of unimaginable crimes. Our lead detective Liz works in the Rule 34 squad.
A series of apparently connected murders take place. Only no one can figure out the perpetrator and the motive behind the crimes. Stross moves from the grissly murders to explanations of AI, singularity and spam with ease managing to keep you on the edge of your seat.
Its a complex novel that virtually demands a reread. It is also written in a weird second person style that jars at the beginning but succeeds brilliantly at putting you in the characters frame of reference.
Its a future that is wonderfully imagined with all its intricacies and richness. There are info dumps that in the hands of a lesser author would put you to sleep but here just add to the whole.
There is also a financial subplot going on which I didn't understand(Like I said demands a reread).
I think in ten years or so we are going to realize how spot on Charles Stross really got things. Its brilliant, inventive and a ripping good yarn.
You can buy Rule34 here.