The cellist of Sarajevo 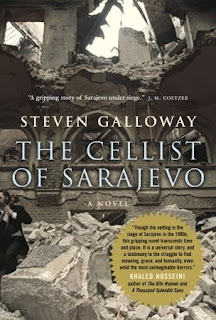 The Cellist of Sarajevo by Steven Galloway is a beautiful novel. Its a quick read but also a deeply moving one.
This book concerns itself with the time when the city of Sarajevo was under Siege, when crossing the street was a life or death thing(Some might argue that it always is :) ).
There is a square in the town which was shelled as a result of which 22 people died(Not a very large number in the context of things). A cellist decides to play in the square for 22 days as a tribute to the 22 who died and each day he plays a piece called Adagio.(Hear the piece, then read the novel)


There is really nothing more I can really write but I think it suffices to say that this is the best novel that I have read in a long time.

You can buy The Cellist of Sarajevo here.