The windup girl by Paolo Bacigalupi : A future without Oil and genetic engineering 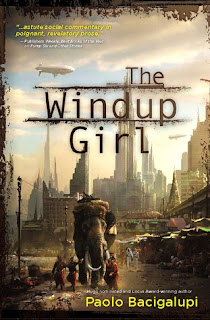 The Windup Girl by Paolo Bacigalupi  (Don't even try to pronounce the author's name,  I gave up after a few tries) is an extraordinary book. Its hard to see how this is his first novel (Even China Mieville wrote King Rat first up).
The book is about the near future and is set in Thailand. The world has been afflicted by a plague due to which new food varities need to be developed again. Human tinkering has produced new cpecies and of course since we have run out of fossil fuels new energy sources have to be found. It is against this backdrop that a rich cast of characters comes to life.
The plot concerns itself with a Mr Anderson Lake a factory manager who is actually in Thailand on a covert mission to get the aforementioned foods which somehow Thailand has managed to procure. The other characters includes Enmiko the windup girl, a yellow chinese who has had to migrate to Thailand.
This is a wonderfully realized tale. Bacigalupi walks the tightrope between exposition and character development with consummate ease. This is one of the best books I have ever read and regardless of your choice of genre is a must must read.

You can buy The Windup Girl here.