The Dervish House by Ian McDonald : Nano tech in turkey with prose that would make Booker winners jealous 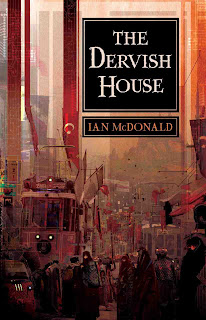 This is McDonald's third in his novels about developing cities in the future. The law of trilogies tell me that this will be his last in the series for some time to come.
The Dervish house is set in Turkey which is at the heart of a nano tech revolution. River of gods was about AIs in India and Brasyl about Quantum in Brazil so I think he has got his bases covered. The plot deals with a few characters linked by a Dervish house and a bomb blast which turns out not to be one.
The thing with McDonald is that you know what you are going to get. You know that the prose is going to be bloody brilliant, the plotting is going to be virtuoso but he always manages to surprise. This one is no different.
There are passages of such staggering beauty, sections of such brilliance that they make the book worth reading all on their own. No one can meld philosophy and and an action sequence in a single breath the way he does. Also no one, no one writes a football game the way McDonald does. I said this in Brasyl and that seems to hold true here as well.
As always his descriptions of technology are spot on and eye openers. He has the uncanny ability to see how the greatest advances in technology will be used by the most conservative societies. He has that  vision about how developing countries will interact with the future.
And what do you say about the characters. Wonderful, fully realized, vividly etched out but my favorite just happens to be the Kebab master chef(who albeit has an extremely minor role).  As always though with McDonald it is the city that takes centre stage. I doubt if Istanbul will seem as magnificent and McDonald has made it.
The Dervish House is an excellent book. A deserving awards nominee(and by my reckoning one of the best books I have read this year). I have to hunt out Desolation road and Ares express to read now, in fact all of his books.

You can read The Dervish House here.