Adapt By Tim Harford : Why companies die and how innovation works 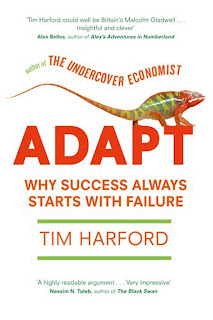 In Adapt Tim Harford points out that the world we live in has become incredibly complex. He begins with the example of a design student trying to build a toaster from scratch. (He fails of course because he sets out to even make the alloy the toaster is made of). He also begins the book by laying the foundation for trial and error which is
1) Variation
2) Survivable Failure
3) Selection
He points out that big leaps sound and look better but it is better to make small changes and measure the impact. He emphasizes on keeping failures survivable. He points out that trial and error(evolution) is the best way and also points why it is so hard to do so.(It is ridiculously hard to admit that you are wrong, to take the view that you made a mistake and that failure is very very difficult to deal with.) He deals with how the Iraq war turned when it seemed all hope was lost thanks to the ground forces adapting to the insurgents.
He takes on how bureaucracies stifle innovation and allow bad practices to flourish. He points out what the most successful organizations do to encourage innovation(create a safe haven for research where they are isolated from the rest of the world).
He then takes on problems like climate change and shows that these problems are anything but simple with several lucid examples. He links problem solving to evolution and says that solutions arrived at by trial and error(although he does acknowledge the importance of the occasional aha moment and the intuitive leap), these are the solutions that work best rather than the big picture solutions that aim to solve problems in one swoop. The world is simply too complex for one magic bullet.
He then proceeds to analyze several of the largest failures of the past decade including the oil spills and a mishap at a nuclear reactor and how the safety catches built into these systems backfired. He then proceeds to map out a possible course of how these failures could be kept survivable. He likens these to the safety blocks among dominoes so that the failures are self contained and do not result in a cascading effect.(In case of the oil spill one failure resulted in other systems failing which snowballed into a disaster) He also points out how the financial system's failure can be contained(by breaking up banks) so that the impact does not cripple the whole economy. He talks about decoupling and loosely linked systems.
All in all its a fantastic book, a great read written with erudition, full of ideas and an absolute page turner along with being incredibly ambitious. Here is a talk at Ted that Tim Harford gave that captures the essence of what he is trying to say better than this review ever could. (Watch out for the part at the end where he says everyone he talks to says trial and error is obvious but then does the exact opposite while voting or taking decisions and the part where he talks about how Unilever developed a nozzle to manufacture  their detergents)

You can by Adapt here.