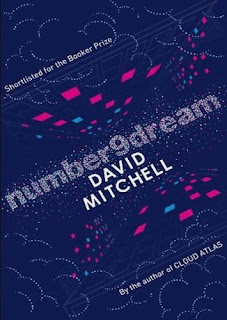 Number9Dream is the tale of Eiji Miyake who wants to find his father. He travels to Tokyo from his village to do so.
Its not a straight out quest though. He encounters the Yakuza along the way. Dream sequences and Video games abound. There are death sequences so horrific that the line between the surreal and real begins to blur.
David Mitchell is a pure storyteller. He creates suspense and keeps you turning pages all the while churning out prose of the highest quality. This is especially true when he goes into flashback mode. His ramblings are even better and he probably knows Japan as well as anyone with its unpredictable earthquakes and confined spaces along with the food. (He lived there for quite a while hence this is no surprise really). As with his other novels he structures Number9Dream into self contained arcs that make a whole larger than the sum of its parts. There are also a ton of John Lennon references that I didn't care for but that is a small gripe in an otherwise outstanding novel.
However If you want to start reading David Mitchell,  Cloud Atlas would probably make for a better starting point.

You can buy Number9Dream here and Cloud Atlas here.