The Gone Away World by Nick Harkaway : Incredible tale set sometime in the future 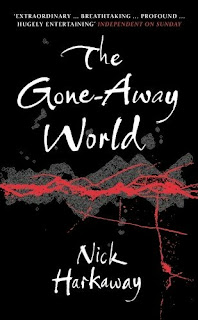 This is a terrific novel. Easily the best debut I have read in a while (including Altered Carbon).
I was moved beyond words by Gone Away World even though I anticipated the twist. I was one with the narrator, his every triumph became mine, his sorrow melded with my consciousness. A novel hasn't done this to me in a long time.
The plot concerns our narrator who narrates his life which intertwines with the life of his best friend Gonzo Lubitsch. Its set in future where a weapon has been deployed, that has consequences beyond what anyone could have imagined. A pipe runs through the world keeping the world livable. This is as far as I will go about revealing the setting because anything more would take something out of the reader's experience, the slow burn of connecting the dots and figuring out how the world became gone away would be ruined.
Gone Away World is many things, dystopia, sci fi, fantasy, horror in parts along with a bit of romance thrown in. It is a novel that is so much more than the sum of its parts. Harkaway is the real thing, a storyteller who weaves a tale with deftness and grace. The action will have you feeling every punch, every kick thrown. He is a writer that I will watch out for.
The other reviews I read said that the novel feels overwrought in places and lengthy. One even said that  Harkaway forgets his duty to the reader. I say bollocks, I enjoyed every single word of it. The writer has no duty to the reader, he simply must tell the tale the way he sees fit.

You can buy The Gone Away World here.

Jeanne said…
This is one of the best contemporary novels I've ever read. And now you have Angelmaker to look forward to...
September 9, 2012 at 8:10 PM

Kartik Kaipa said…
Yup. This is a great novel. Incidentally I read Angelmaker before this. Angelmaker is amazing as well.
November 13, 2012 at 11:34 AM