The Scar by China Mieville Blown away after a Reread 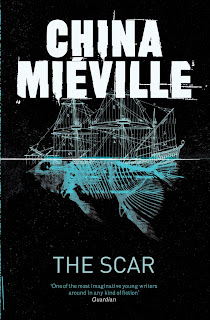 I just finished Rereading The Scar by China Mieville all over again. If anything this time I was even more entranced by the world of Bas Lag. I even looked at the Maps of Bas Lag which I never bother doing.
There is so much to enjoy and relish here, the astounding world building, the depth of the characters, the way their motivations are setup, the way politics works.
Bas Lag is a world filled with strange creatures pulled from various mythologies and legends. Their motivations, the way they think seem alien until they do not.
Elves and Dwarves seem to be old news when you see the depth of the Races that Mieville introduces.
Perhaps the greatest thing Mieville manages to pull of is create the most plausible situations out of seemingly unconceivable beginnings. All his characters are not even humanoid, but yet you are drawn to them, their power struggles and sucked into their narrative. The impressive thing is that each race is developed with strengths and weapons that work best against them. The amount of thought that must have gone in to flesh the world of Bas Lag out makes me shudder. This is world building at its absolute finest.
The plot moves, twists and turns and takes you along for a heady ride. The prose is fascinating in itself with every word honed to precision. Oh sure there are extraneous descriptions, they just make the tale better. The ending leaves you gut wrenched leaving you wondering what actually happened. Did I read the fucking book right. It is an ambiguous ending but the more you think about it the more your realize that it couldn't be any other way. The ambiguity is what makes the end satisfying.
So what is The Scar about anyway. It begins with Bellis Coldwine on the run from New Crobuzon fearing the Militia. She is on a voyage to Nova Esperium on board the Terpischoria. Events transpire so that they get stopped midway then Terpischoria is taken by the Pirate City of Armada. A floating city of ships with its own strange logic, its strange leaders. They are on the hunt for the Avanc, a sea monster miles long that will propel the City of Armada to The Scar, a place where the world breaks and becomes fragile.
Giving more away would be a travesty. This is a novel that deserves to be read and then reread.

Unknown said…
Found you via Google +. Just finished this book at it just blew me away.

I have to take a couple of days to process it.

Every page just got better and better and the ending was so--it was so good. It was beautifully, poetically written. I just loved it.
February 25, 2013 at 1:16 PM

Thanks Chris. Glad the book review made a difference.
His other books are brilliant as well.
Try reading Perdido Street Station and Iron Council as well.
The Bas Lag series of books is mind blowing.
I agree completely with what you said about The Scar. I could not think about anything else for a week.
February 25, 2013 at 6:28 PM

Unknown said…
Bob Tasks, the bio published by Wally Isaacson, is as much about the record of technological innovation and multi- press as it is about the creator of the The apple company Organization. Isaacson, who also composed biographies on Jordan Einstein and Ben Franklin, was contacted by Tasks truly to create his precious moment. Isaacson had Jobs' advantage to extra no information in informing the tale of his business and individual life. crosswrods solutions