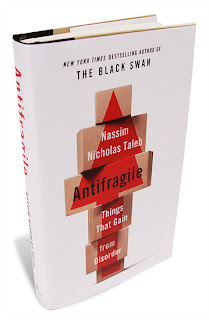 Been a while since I wrote a book review. Truth be told nothing I read perked my interest in the last two months but Taleb's Antifragile changed that.

Antifragile is his latest tour de force and it is his finest work yet and the logical culmination of what I would like to call the Randomness trilogy. In fooled by randomness Taleb talked about assigning causes where none exist and how to take advantage in day to day life. In The Black Swan he spoke of events that while improbable had great impact and in Antifragile he talks about how to maximize the upside of random events while minimizing the harm.

Antifragile is well written as always with Taleb's personality jumping off the pages. His insights are particularly engaging and there are numerous talks on youtube in which he talk about Antifragility. The thesis as with all great works is remarkably simple and seems obvious and intuitive once you get it.

He essentially defines Antifragile as not fragile. Fragility is defined as breaking under volatility and stress say the way a porcelain cup breaks when let go. So anything Antifragile by definition prospers and thrives when there is volatility and randomness.

He talks about how the systems built by humans and nature differ in the fact that human systems are more fragile and brittle. He gives numerous examples, the most common one being that the body always overcompensates for the stress it goes through but we continue to prepare for the mistakes that have already been made rather than preparing for new ones.

He talks about several logical fallacies that humans make by mistaking absence of evidence for evidence of absence. He shows that whenever some new fangled food to consume is created by humans the burden of proof to show the benefits is upto us. He talks about how no one could prove that smoking was bad for us for a long time and this led people to believe that smoking was NOT bad because of absence of evidence. He talks about the arrogance of humans in believing that in a short duration they could come up with a better substitute for mother's milk.

He talks about how the nation state is fragile and how any centralized system will eventually be fragile. He talks about the wisdom of the ancients and the way they carried on about adding elements of randomness to their lives. He talks about Seneca's wealth at length going to show how he tried to get in situations where his upside was maximized and downside minimized which he then states to be the true goal of stoicism.

I liked the way he spoke of the human body liking randomness and appreciating it. Our health does not appreciate regular nutrition and rather than doing something everyday activites, food should  be consumed in bursts rather than at fixed intervals for that is the way we have evolved.

The section I liked best though was the one on medicine and doctors where he spoke of the benefit of doing nothing a lot of the time because in a lot of the cases the body takes care of itself and anything that delays treatment is a plus. Medicine's first prerogative should be to do no harm. A lot of harm comes from what Taleb calls interventionism (which as you can guess is the tendency of doctors to do something rather than nothing).

He talks about another sort of antifragility as well which is an upside by passing the risks onto someone else. One particularly illuminating passage mentions that fact that in ancient times the builder would be responsible for the building and if anything were to happen to the building the builder's head would be chopped off. He calls this having Skin in the game and points out that where banking and academia is concerned no one really has their skin in the game. When the going is good they get bonuses, when the going is bad there is no downside.

What I also  liked about the book is that never once does he ask you to do something but mentions what he does instead.

I think I have made the whole book sound much drier and much more academic than it really is but it is truly
a wonderful read from start to finish imbued with personality, opinion and a lot of anecdotes.

You can buy Antifragile here.