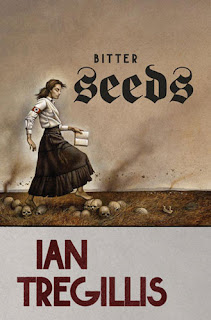 There was a great quote by China Mieville when Kraken came out. It went something like
“Part of the appeal of the fantastic is taking ridiculous ideas very seriously and pretending they're not absurd.”
and Bitter Seeds by Ian Tregillis is one of those which is based on the completely absurd notion about what would happen if Germany had X Men and Britain had Warlocks during the World War.

It is an absurd notion brought to life because  Ian Tregillis treats it very seriously and fleshes out the novel with a great deal of though. I know I made the reference to X Men earlier but this is a war novel more than anything else and its a cracking good read.  I found it hard to believe that this is Tregillis's first novel. I particularly enjoyed the Ravens in the interludes and the way they were weaved through the story. I was hooked from start to finish.

The characters are well written and their arcs are structured so that everyone seems to be doing the right thing which is usually hard to do. What also surprised me was how Tregillis added a lot of verve to each place where the novel took place. I think I probably learned more about the World War from this novel than from a history book, which is a credit to Tregillis.

All in all a fine debut. I will definitely be wrapping up the trilogy. I think everyone will enjoy this because at the end of the day Ian Tregillis has managed to create a great cast of characters and put them in a great story and once you wrap your head around the premise Bitter Seeds is a great beginning to what should hopefully be a fine trilogy.

You can buy Bitter Seeds here.