This goes out to Hall 1, the hostel where all the 4th year students of IIT Kanpur live. Indeed this hostel serves as a meeting ground between familiar foes some of who go on to become friends.

A lot of factors make Hall 1 what it is. It acquires a mythic quality right from the first year when juniors are often threatened with “Aaj raat hall 1 main chal”. The seniors who live in Hall 1 seem to have a totally different existence as compared to the rest of the campus. On a visit to the hostel in the first year all one hears is the constant swearing, and sees everyone in shorts or in suits. Legends surround Hall 1 and in our first year the stories we hear are of Hall 1 and none other. Indeed Hall 1 residents perpetuate this myth as well acting as if they are the scariest beings on the campus. Indeed the fear is such that if a fresher goes to Hall 1 they are not expected to come back.

There is something about Hall 1 that separates it from the rest of the Halls. For starters, Hall 1 has the smallest rooms in any hostel found on campus and yet these smallest rooms contain more things than the biggest on campus. If anyone is a coordinator, all manner of things starting with posters, pen drives and tshirts(if one is lucky) are stuffed into the room. Because the room is small and perhaps because it is the final year a visit to a room entails many gifts.

Hall 1 was the first Hostel to be built and that’s why it is the most central location in the institute. Everything is close by, the academic area, the shopping center, the main stadium, the placement office and of course last but definitely not the least the GH. Because everything is just a jump over a wall away many cycles die a silent death as they do not have any further use. Also because everything is close by and it is the final year, everyone goes everywhere wearing a pair of Pajamas or shorts with Hawai Chappals. Even multinationals are at the receiving end of this fashion during PPTs.

Hall 1 also houses the students under the most stress on the campus. Everybody has to complete their BTP, is a coordinator along with it but everybody finds time to do everything. This is also the time for placements but this doesn’t seem to affect the students. In fact nowhere are the students more relaxed than in Hall 1.(Except during placements perhaps when the usually chirpy canteen becomes silent) This rubs of on everything and everyone in the Hall as well. The maintenance is lax and nobody seems to mind. The hall office forgives giving mess bills late which no other hall does. Because few eat in the mess, the mess workers do not mind handing out extra rations. I still remember eating at least 3 watermelon slices whenever they were available, getting a full fledged breakfast consisting of everything that was placed with no restrictions on what to eat. Instead of eating this or that we ate this and that. Since this is the final year, the dhobis, sweepers are all continuously asking for bakshish. Indeed our dhobi would turn up every other day early in the morning (8 am or so), ask for clothes and then for some money. (Bhaiya, yeh chal nahi raha, ghar main kam paisa hia. Aaj bahar jana tha and so on so forth).

What would be considered debauchery in other halls is in fact the norm. Where else would you find a life size portrait of Jim Morrison, Jimi Hendrix and the Beatles(a work of art, and a must visit) on the walls of a hostel. Other wings have South Park characters(Easy to draw, I suppose) on them. Everyone expresses themselves in Hall 1. 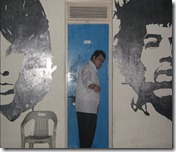 The above have been drawn using just pencils. Find it in C BOT, Hall 1. In the center pic, John(His real name is Vaibhav :)) with his works of art. Jim Morrison on the left. Hendrix on the right. If you haven’t seen it do so. The wing and others contributed nights of just darkening the walls with a pencil.

Hall 1 has a tradition of something called Hall 1 ki Baarat. This is where a student is selected to be Hall 1 ka Dulha and another becomes Dulhan. There is a full fledged baarat which goes to all the Hostels and then finally goes to the GH where the girls pour buckets of water. Students try to climb the walls and what not. The Hall 1 Dulha is actually the most prestigious position in Hall 1 and even politics goes into selecting the Dulha signifying the importance of the occasion. The above is not the strange part. The strange part is the fact that this is sanctioned and funded by the hall. I bow to persuasive powers of the student who managed to convince the Hall administration to allocate funds for such an event and convince them of its necessity. There is another tradition of Hall 1 where the students participate in Rithambhara, the fashion show of Antaragni(Our cultural festival). A special wild card entry is arranged (although they are there just to perform not to compete) which sees them talking about the fashion of Hall 1(Chappals and Shorts :)) and dancing to the most inane songs. This is actually the most entertaining segment of Rithambhara.

Hall 1 sees students and wings at their most active. Mostly everyone steps out of their rooms. The small rooms become home to many bulla sessions. Perhaps it is because everyone realizes it is the last year on the campus(or at least everyone hopes that it is). This rubs of on the dual degree students who in fact end up enjoying themselves more as they do not have to contend with placements and applying for scholarships.

Hall 1 also sees a lot of phatta(Cricket in plain speak) being played. Everybody plays phatta. Football is played as well but usually when it rains kichad mein.  Since the advent of the basketball court phatta sessions have gone on the entire night. Hall 1’s phatta tournament is amongst the most highly anticipated events in the calendar. Sometimes the basketball court is used to play basketball(which is grievously wrong). The ground is always occupied(especially at night) with something or the other always going on. The hall 1 ground is also unique with respect to its location. Other hostels usually have grounds located where they cannot be seen but Hall 1’s ground can be seen and is on the central road which most people use. Indeed passers by are often asked to return the ball. Hall 1 has many anecdotes. This one’s one which I was privileged to observe. Everyone is playing phatta. The bowler runs in to bowl, the batsmen is ready to smash the ball when all of a sudden everybody starts to gravitate towards the fence. The bowler stops bowling and moving towards the fence as well. The batsman moves backwards(the fence is behind him). The fielders move forwards. The reason, a whole lot of the better half just walked on the street.

The Hall 1 canteen is another beast which seems to take on a life of its own. Amazingly in a day or two Manoj, Pradeep(The owners)know the names of all the students who frequent the canteen along with the room numbers. It almost entirely substitutes the mess for some and is amongst the canteens who maintains a record of the expenses of the students.  Of course this expense is enlarged in many cases. I still do not know how much a lot of the things in Hall 1 cost. Hall 1 canteen has this character called the Baaz (translated into English it means Hawk) and he is so called because he notes down what he saw you touch(note that it isn’t necessary that you actually eat what you touch. Once you touch the packet its in your account). Many students have been at home only to find that they are in debt of the canteen.

Hall 1 is a hall of contrasts. On one hand everyone wants to get out of the Institute (with a degree) but there is a tinge of sadness as this is the last year, such fun will never be had and such friends will never be found. Hall 1 was a really great stay. I really do hope that all 4th year students get to live in Hall 1 for a long time to come but with increasing strength it might not be possible.