An interview with Samit Basu 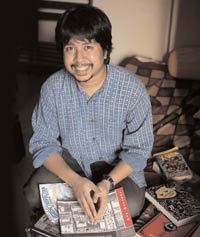 This is an interview with Samit Basu, one of my favorite authors. I have a feeling that had he been British or American with a snazzy bestseller name he would have won a closet full of awards by now.
I have enjoyed reading his work immensely and his debut, the Gameworld trilogy(as I have made clear here) has the effect of sticking to my hands whenever I pick it up and leaving only when its done. Heck I even enjoy reading his 140 character tweets.
His last two novels Terror on the Titanic and Turbulence are great rides, written with a verve and panache that few authors match. He has also written short stories(One of which was in an anthology of erotic fiction) and comics.
All in all he is just a fantastic talent and US and UK readers should get a taste of his work soon when Turbulence is published there.

You wrote this trilogy called the Gameworld trilogy(which was absolutely gobsmackingly brilliant and fantastic by the way). Any plans on doing another trilogy soon.

Thank you. It's heading towards ten years since I started writing Simoqin, and it was a very happy time.
I don't know if I'll do another trilogy again; I'd like to, but I'll do it only if the story demands it, like Bollywood actresses say about kissing. I'm working on a story that might demand three books - I'd like to do it as one really fat 1200-pages-or-so book, but we'll see what the publishers say.

Terror on the Titanic had a remarkably convoluted plot for a YA novel linking together many diverse strands of history. Most remarkably it did not talk down to the readers. How do you manage to get your publishers to publish that sort of stuff for young readers?

Well, in India at least, since all five books have done well, publishers have a certain amount of confidence in me - I won't be responsible for their new cars, but I won't bring them into financial ruin either, and the process will be more fun than pain. So they let me do what I like, pretty much. I don't think my books are hugely complicated in essence - it's just that I have a habit of linking very different things together, so the implications are huge even if the actual plots are fairly straightforward. So you can choose to go allusion-hunting or get lost in imagining possibilities, but I think the stories themselves are not convoluted in essence.
I hope there'll be a similar process in the West, of publishers feeling confident that my work, with all its complications, will find readers. Turbulence comes out in the UK in 2012 and in the US in 2013 - I'll be starting from scratch in both countries, which is exciting.

Turbulence was an absolutely mind bending read. How did you come up with the powers that the characters had?

When figuring out powers for Turbulence, the key question was - what powers would be relevant in 2010? Which means, what are our defining/important themes now, in the world we live in today? If the nuclear age gave us Superman, and WWII gave us any number of jingoistic/patriotic national-icon heroes, and the 70s with their race/political tensions gave us the X-Men, what would this generation's heroes be? In Turbulence the link is fairly direct - everyone on a plane from London to Delhi gets physical powers corresponding to their own innermost desires and fears. So the powers would relate not only to the characters who got them, but to the pressing concerns of the time.

India as a nation has a large propensity to believe in the fantastic. Our mythology is probably the richest set of tales amongst all the world mythologies but fantasy and science fiction are still looked down upon.
Why is that the case?

I think the people of any nation are inclined towards loving the fantastic - most of the books that have taken the world by storm and built empires over the last decade are fantasy in one sense or another. And yes, we have a rich mythology, but so do any number of other cultures.
I honestly don't think science fiction and fantasy are looked down in India at all - if they are it's by a small circle of people desperate to imitate literary-fiction people in New York or London, appropriating their prejudices along with the rest of their conversation. The problem is not that there isn't a readership, it's that there simply isn't enough good writing. Also, fantasy/SF ventures in film and animation and TV in India have been uniformly dreadful, which doesn't build an audience for genre literature. It'll change one day, and hopefully I'll be alive to see it.

You dropped out of IIM A (of all places) and went to study in London. How hard or easy was the decision and why did you decide to go along with it.

It was a decade ago. I'd always wanted to write a book, but hadn't started because I hadn't had a single idea yet that I felt was book-worthy. The right idea happened one night in my dorm, at about 2am, when the ending for The Simoqin Prophecies popped into my head. So it made no sense to stay and get a degree I didn't want from a place full of bright people who really, really wanted what it offered. It was an unfortunate time for that idea to strike - I could have made a lot of money if it had hit me, say, five years later. It wasn't a hard decision, it was clearly the thing to do, and the people who knew me best were completely supportive, which made the process easy as well.

Are we living through another Golden age of science fiction and fantasy? I have never seen so much good work being put out by so many brilliant authors.

I guess so. It's also because speculative fiction is now mainstream, across media, which encourages the best writers to write it. I'd say there are now better writers in SF and fantasy than in any other field, with the possible exception of graphic novels. Screenwriting is going through a bit of a golden age as well - a lot of writing for TV and film is fantastic now.

I have discovered some fantastic authors thanks to your posts including the sublime China Mieville of course. Who are your favorites apart from him.

For a while you wrote a few comic series including Devi and The tall Tales of Vishnu Sharma. Any graphic novels in the works?

Yes, two. But while I'm fairly confident about announcing books, largely because I am the only person involved in putting them together, I don't like to talk about projects that involve other people until they're actually out. But yes, two graphic novels, both with fantastic Indian artists.

I like any kind of writing. Books, comics, film - which I've been working on - short stories, even tweets.I'd really like to write a video game as well - almost got to do one a couple of years ago, but the project disappeared.
I don't know which one is easiest - they're all very different. Which is fun - writing just one kind of thing makes you age faster.

A book that you read recently that just blew you away.

What books/comics influenced as a kid.

All of them. Sorry, just too many to list. No one made me happier than P.G. Wodehouse, though.

So with Ra One hopefully we can get some more science fiction and fantasy made in India. Which of your novels could be adapted into films.

I spent a lot of this year trying to push a Turbulence adaptation through. It would be a very expensive and difficult film, so it'll probably take a lot of time. But I think it might happen at some point. I don't think anyone could adapt the GameWorld books or Titanic, at least not in India.

Your thoughts on the whole ebooks vs books issue doing the circles right now. Which do you prefer?

I love both. I don't see why I need to choose between them.

Finally the mandatory question for all writers. Any advice for aspiring writers?