Thinking Fast and Slow by Daniel Kahneman : The mind is stranger than we supposed it was 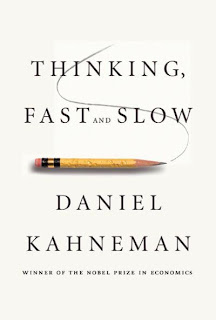 Thinking fast and slow is the culmination of the decades of research of Daniel Kahneman and his  posthumous colleague Amos Tversky. (For the ones who give weight to awards Kahneman is a Psychologist who won a Nobel Prize in Economics, a strange quirk)
Daniel Kahneman talks about how minds are divided into two systems System 1 and System 2. System 1 is our intuition, the fast one, the quick and the default decision maker. System 2 is the rational one, the one that does the hard thinking. Kahneman of course makes the point that System1 and System2 are convenient abstractions and are only models that make it much easier to think about how the the mind works.
The best way to describe the book would be say that it resembles Blink by Malcolm Gladwell, only its a lot more rigorous.
He talks about several human fallacies and how man is in fact not rational but can be manipulated. He talks about experts in which fields are really experts. He points out that to truly become an expert one needs constant feedback so anyone who makes long term predictions is basically incompetent because he has no feedback. Anyone is just as qualified as he is to make an assessment. The political commentators are the example he takes. He also points that Mutual funds are a giant scam and that they are no better than monkeys when it comes to choosing stocks. (They are actually slightly worse).
He also talks about people being more risk averse than gain seekers. A person will take more chances to avoid losing than gaining something even though economically both might be the same. He places several examples but the one I remember is one about golfers. Most golfers will putt better when they have to save a bogey than when they have a chance for a birdie.(For the numerically inclined the difference is around 4%, a sizable difference in a game where tournaments are usually won by a one stroke lead).
He talks about intuition and gives clearest definition of intuition that I have encountered. He says that intuition is recognition very simply. He points that  a surgeon operating is no more special than a child recognizing a ball. (Admittedly this might be an over simplification but its a good definition nonetheless and a clear and simple one).
The book is also peppered with anecdotes on his collaboration with Amos Tversky and many other psychologists and economists. He also talks about the time he spent in the Israeli Army and how he was able to apply his training as a psychologist to the problems that he encountered. These lend the book a surprisingly melancholic feeling of someone who has carried out his life's work and laid bare his soul for all to see.
Its a fascinating book but its a long one as well at around 500 pages(I enjoyed it so I didn't really feel it). Daniel Kahneman writes extremely clearly and leaves absolutely no room for confusion. Too often non fiction books get caught in trying to use fancy verbiage which render the subject under consideration unintelligible.  If you don't feel upto reading Thinking fast and slow you might want to watch this talk Kahneman gave which sums up the book and his findings far better than I ever could. There are also a lot of extracts doing rounds on the web so you might want to check those out as well.

You can buy Thinking Fast and Slow here.