The Islanders by Christopher Priest : A Mindbending and narrative defying read 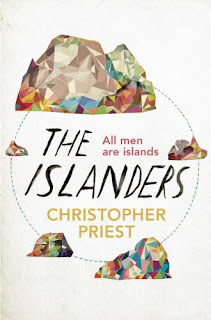 No book has surprised me as much as The Islanders in the past six months. The review is late in coming only because I couldn't figure out how to put what I felt into words.(In case you don't know who Christopher Priest, he is the guy who wrote The Prestige out of which the gobsmackingly brilliant Nolan movie was crafted)
I expected The Islanders to be a great but slow read but instead it turned out be a great page turner. Priest builds a great narrative out of seemingly disparate strands and all his criticisms of the Clarke Award nominees seem well founded.
The Islanders is more a series of stories about different places but they connect in subtle ways and it makes for a surprinsingly cohesive whole. There is a masters hand at work here because in less dexterous hands the novel might have disintegrated into a meaningless nothing. Priest throws a line here and there that just shifts your perception, and makes you view what you have read earlier in a totally different light. There is a chapter on Thrymes(I don't want to spoil anything by giving too many details) and that single piece of writing is alone worth your money. That single chapter is what I recall six months after reading it. (Actually almost everything is brilliantly conceived but the Thrymes will chill you to the bone)
The Islanders is presented as a guidebook to the Dream Archipelago, a network of islands that has not yet been fully mapped and explored. In the beginning you even wonder if its a novel. Slowly but surely Priest draws you in and builds up intrigue. There is murder, there are doppelgangers and then there are  unreliable narrators and mime artists. There are discussions about artistry and about art. The writing is always top notch with scarcely a word out of place.
The Islanders was stuck in my head like a tune that does not go away. I would experience epiphanies all of a sudden that connected two seemingly different stories. The second read was the headiest sensation I experienced in a while. A truly great and heady piece of work.
A tweet from Gollancz informs me that Priest's next novel The Adjacent is out in August 2013 and I couldn't be happier about the same.

You can buy The Islanders here.

Jess said…
Cool stuff. Posted the review on our facebook site. (Christopher Priest wrote a short film related to magic called The Stooge. We’re in pre-production for it now. Also working on the project is Tom Joyner (Jaws), Kent Butterworth (The Simpsons), Rogelio Fojo and many more talented crew and cast members. https://www.facebook.com/thestoogemovie
July 31, 2012 at 12:57 PM

Kartik Kaipa said…
Hey great that you are doing a short film based on a priest novel. He writes fantastic novels that are different upon every reading. Hopefully your short will be the same.
July 31, 2012 at 1:22 PM