The Undercover Economist by Tim Harford : Economics for the rest of us 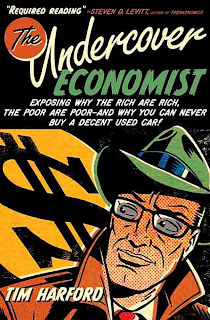 Economics seems to be full of jargon, but once you get drill down to the fundamentals,  it is about who gets what.(or at least thats what Tim Harford says)
The Undercover Economist is what a book about a complex subject should be. Its clear, lucid, well written and once you read it you will never look at the world the same way again.
He talks about how companies price their goods(Different from how you think it works). Who gains most when Starbucks sells you a coffee near a metro station and he talks about the power of scarcity.  He takes problems and manages to distill their essence so that at once you understand how things work. He talks about why poor countries remain poor and how China became rich. He deals with why its hard to buy a good used car. There is a section on auctions that is breathtaking.
Economic terms come and go but they don't fly over your head. I actually understood most of what was being conveyed. Its really an effortless read. Now that I have had a chance to think about it, the thing that Harford does really well is talk about when Economists get things wrong sometimes to the detriment of the profession and the government. He does this most memorably with the auctions section where he talks about why certain auctions failed.
Tim Harford takes a subject which I quite frankly thought to be a purely academic one, breathes new life into it and turns it into an absolute page turner.

You can buy The Undercover Economist here.