The City & the City by China Mieville : Two cities with the most peculiar geography 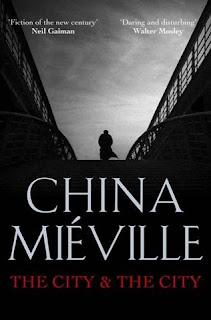 A hard boiled detective novel is familiar territory. What usually happens is that there is a murder that takes place which seems to be of no consequence but turns out to be anything but. As the story pans out it so happens that there is a larger conspiracy happening and its up to the lone detective to solve the mystery.
The City & the City is Mieville's take on the hard boiled detective novel. Is it good? you bet it is. It embraces all the trappings of the genre, enhances it and makes it something more.
The premise is simple and yet complex when given a thought. There are two cities, both of which occupy much of the same physical space owing to strange quirk of history. The citizens of each city practice something called unseeing and unhearing to ignore the residents of the other city. The cities have their own arcane rules for passing through of course. A seemingly innocuous murder takes place which quickly becomes something more.
Mieville tackles an extremely complex novel with consumate ease. You don't even realize how well he's immersed you in the twin cities of Beszel and Ul Qoma. For all its merits though, the usual flair which is omniscient in his Bas Lag novels is not present. Like I said in Kraken's review it seems as if Mieville has reined himself in and held himself on a tight leash. Also there are no lovingly described with great details monsters(To be fair though, it would have been impossible to insert monsters into a novel like this).
This novel is based in our own world so Google, Facebook et al are commonplace and it is his shortest novel by far, so it is a good introduction to Mieville's writing. If you haven't read anything by Mieville this is the place to start.

You can buy The City & The City here.