River of Gods by Ian McDonald : Science Fiction set in a future India, a magnificent piece of work 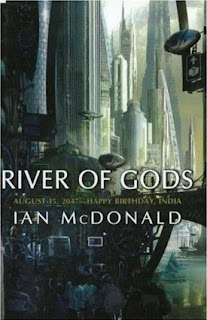 If ever there was such a thing as the definitive science fiction novel on India then River of Gods is it.
The amount of research that Ian McDonald has done is incredible(either that or he has lived in India for quite a lot of time). He captures India with all its contradictions and uncertainties. A nation which is god fearing, steeped in traditions and rituals and at the same time at the forefront of knowledge.
He also manages to write a damn good science fiction novel in the process. The story takes place in 2047, 100 years after India has obtained freedom from the British raj only its not India anymore. Its split up into 12 semi independent states. It hasn't rained in a while so there is a water crisis. The title itself refers to Ganga around which much of the action takes place.
The story is written against this backdrop from the point of view of a number of characters who are all well realized. Of course the character arcs intersect by the end to bring the novel to a satisfying close. There are a couple of characters who aren't really worth it but that's a minor gripe.
The prose is fantastic and peppered with insights into how technology and science would affect life in modern India.
Its a dense read however. The first few pages where Ian McDonald introduces terms might need revisiting to understand what is really going on. Consequently the middle which is usually the boring part of a book is where River of Gods really comes into its own. This will take a westerner a significant amount of time to read and really flow with the words.(but the journey is well worth it).

You can buy River of Gods here.