The Thousand Autumns of Jacob de Zoet by David Mitchell : The adventures of a Dutch Clerk in Feudal Japan 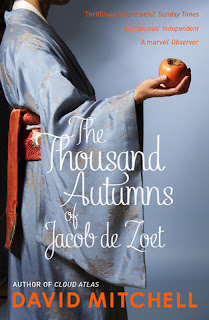 The Thousand Autumns of Jacob de Zoet is a brilliant and utterly fantastic book. It takes an unconventional setting and makes a genius novel out of it.
Its the last decade of the 17th century. The Dutch seek to restore a floundering trade relationship with Japan a nation that gives access to a few foreigners.
The Dutch have the port town Dejima near Nagasaki. The red haired idealistic Jacob De Zoet enters as a clerk hoping to find his fortune and then proceeds to fall in love of course.(I make it sound as if it cliched but it is anything but). Corruption is rampant and Jacob de Zoet questions his motives many times. Complications arise, a conspiracy is uncovered and an attack on Japan is taken care of with Jacob De Zoet having a prominent hand in the affairs.
The book is beautifully written. The characters are extremely well realized. David Mitchell says a lot but he conveys a lot more by not saying everything out aloud. Also the thousand autumns contains the single greatest first chapter that I have ever read. The sense of pacing, the beautiful prose. It just hooks you in and refuses to let go. Read that first chapter here
A pitch perfect book.

You can buy The Thousand Autumns of Jacob de Zoet here.

musically_ut said…
After reading through books of British sensibility (read: The Tale of Two cities), the first chapter of this book comes across as a hard slap on the face, with a backhanded caress towards the end.

I think I'll put a few other books in between my last one and this one to ease out the effect.

(* shiver again and retreats to read 'The year of silence' *)