Cyberabad Days by Ian McDonald : Short stories set in a divided India of the future 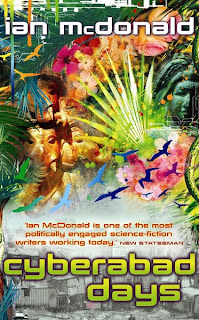 Cyberabad Days is an absolutely fantastic collection of stories of varying length. I never thought science fiction set in India could be done so well until I read this and River of Gods.
The way Ian McDonald writes it seems that he has lived in India forever and his observations about the culture, the ways the caste system works, the preference for a male child are spot on. His prose is electric and Ian McDonald turns even spiritual discourses into absolute page turners. Indeed it is amazing that the best science fiction on India has been written by someone British.
There are seven stories in all each of them covering ample terrain.My favorites include
1) The little goddess
A child who is annointed as a goddess gets thrust into the real world the moment her blood is spilled. She becomes a carrier of high level AIs. Absolutely brilliant.
2) Vishnu at the cat circus
Places the whole of river of gods novel into context. A tale of how a genetically re engineered Brahmin has to live his life. Must be read to be experienced.
3) The Djinn's wife
A human and an AI fall in love. Again read to experience.
4) The Dust Assassin
A tale of rivalry between the two ancient houses of Rajupatana and the Khans and how a princess is engineered to be a weapon from the time she is born.
This is how you write short fiction. I couldn't put the collection down till I had read all of them cover to cover.
An extract which I think is growing ever more pertinent in modern India.
"Economists teach India’s demographic crisis as an elegant example of market failure. Its seed germinated in the last century, before India became Tiger of Tiger economies, before political jealousies and rivalries split her into twelve competing states. A lovely boy, was how it began. A fine, strong, handsome, educated, successful son, to marry and raise children and to look after us when we are old. Every mother’s dream, every father’s pride. Multiply by the three hundred million of India’s emergent class. Divide by the ability to determine sex in the womb. Add selective abortion. Run twenty-five years down the x-axis, factoring in refined, twenty-first-century techniques such as cheap, powerful pharma patches that ensure lovely boys will be conceived and you arrive at great Awadh, its ancient capital Delhi of twenty million, and a middle class with four times as many males as females. Market failure. Individual pursuit of self-interest damages larger society. Elegant to economists; to fine, strong, handsome, educated, successful young men like Jasbir caught in a wife-drought, catastrophic."

You can buy Cyberabad days here.