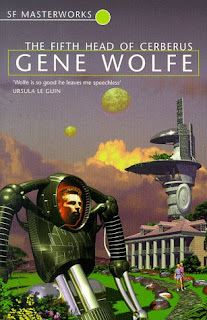 Three novellas, seemingly not connected but so intertwined as to be inseparable. The prose is simple but effective. Wolfe writes with great economy and precision and makes the narration in all the novellas seamless. All three are narrated in the first person and so it can get a bit disorienting at times especially the very first story about father and son who turn out to be not so and an aunt who turns out to be a daughter instead. (Yeah I know it sounds insane already but it is a strange book and a mind bender)
Two planets share the same orbit. Humans came and took over an entire civilization but there is a catch.The catch being that the aliens were shapeshifters. There are stories that claim that the aliens have impersonated the humans and in fact are not extinct.
Now where most authors would adopt a slam bam and thank you madam approach for this sort of tale(I can already imagine a heroic protagonist uncovering a prophecy with him as the saviour and the aliens as villainous human eaters) However Wolfe uses these three novellas with great subtlety and by the end without realizing you know somewhere in the back of your mind what has taken place
Its a tough read. Pick it up if you like interconnected novellas and/or science fiction. This is definitely one of the strangest books that I have read.

You can buy Fifth head of Cereberus here.