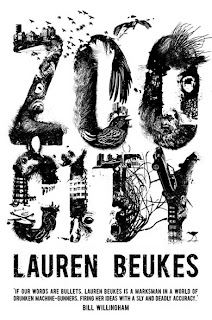 Zoo City is a strange beast. Some sections especially the news reports are well written. The pop culture references(especially a nod to His dark materials by Philip Pullman is apt along with a fake imdb movie page) but some sections just fall flat and require that you plod through them.
The story is set in South Africa where criminals are attached to an animal so that having an animal becomes a marker for having a nefarious past. It turns out that these animals also bestow certain abilities. The protagonist Zinzi December has the ability to find lost things thanks to a sloth. She had been caught in a drug scandal and needs to pay back the mafioso, so she takes up a job she hates, a missing persons job. The novel then proceeds in standard noir fashion to uncover a conspiracy that is larger than what anyone anticipated. There are other animalled characters, an inside guide through the music production business and some gritty fight sequences.  Also because it is based in South Africa the apartheid analogy is apt.
What is nice about zoo city is the fact that the world is incredibly well realized. Lauren Beukes has given the setting a great deal of though. The prose is good as well. I liked Zoo City for the background noise but didn't enjoy the plot. I wouldn't call it exceptional but its a good read nonetheless.

You can buy Zoo City here.