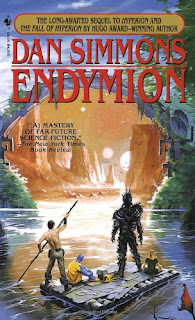 Endymion is the third book in Dan Simmons Hyperion Cantos series and it is quite simply brilliant.
Endymion is driven by its characters, indeed the science fiction elements are incidental to the story.(Not to say that the science isn't well done of course).
The characters are fascinating and their dilemmas draw you in.
The plot is very complex(to say the least, there is time travel, there is AI and what not) but in broad strokes it is about  about a certain Raul Endymion who is named after the planet Endymion. He somehow gets caught up in a rescue mission but rather than doing the rescuing ends up being the one rescued. The pursuers are the more interesting lot though and their harrowing space travels are described in great detail.
The writing is top notch. Dan Simmons is a deft writer choosing his words carefully and keeping the plot on a tight leash. He has this ability to paint pictures with words which shines through particularly in Endymion.
Hyperion Cantos as a series is well worth your time and one of the finest pieces of Science Fiction ever written.
You can buy Endymion here.