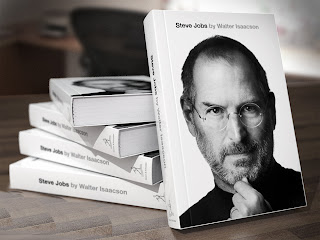 Steve Jobs is A sublime biography. Its beautifully written and presents Steve Jobs in all his avatars. From a megalomaniac to a supreme charmer. I read this in a single stretch in one go so so that must mean something.
Isaacson brings out the contradictions of a man at the cutting of technology who lived like a monk nonetheless. A man who repeatedly says that its not about the money but becomes a millionaire and cheats his best friend Steve Wozniak out of his fair share of the profits. The way he disregards authority but is the most commanding person around himself. How even though he liked to hack other people's work(telephone lines and the like) and wouldn't allow the same to his products.(People will screw things up if they can open them)
It is also an intriguing look at his years of failure, after he was ousted from Apple and went on to found NeXT. The creation of Pixar is present as well. It is an intriguing look at the dynamics and how he ran it differently from the way he ran Apple. The segment on the thought process behind the now iconic Stanford commencement address is fantastic. The book also talks about his reality distortion field, his obsession with zen like minimalism in his designs and what shaped him as a kid.
The more I read it the more I discovered that he was a scumbag. Like most great leaders he had a hint of the bastard about him. The guy who comes out looking the best in the entire book surprisingly turns out be Bill Gates and my admiration for him grew by leaps and bounds the more I read.
This is a good read even for those not enamored by Apple and Steve Jobs. It hooks you in right from the start and you are immersed in it. You wonder why they took the decisions that they took and how the same man could be the paragon of charm and yet be a backstabber.
You can buy Steve Jobs here.

April 23, 2010
So this goes out to Samit Basu one of the finest writers of this generation. (Notice that I didn’t add Indian to the phrase) I remember picking up the first part of Samit Basu’s Gameworld trilogy The Simoqin Prophecies at a book store which has now sadly been closed(It was one of those book cafes that open along with CCDs and Nirulas). The book was languishing amongst the other scifi/fantasy titles in a corner and surprisingly the book had received little marketing but nonetheless the book piqued my curiosity. Reading the back cover I decided to give the book a shot. (Besides the title seemed really cool) Little did I know what was in store. The book turned out to be a  gem, plain and simple, written with such playfulness, such wit that one struggles to comprehend how something like this even saw the light of day. The trilogy can be read on many levels and enjoyed on each one of them. Kind of like Asterix and Obelix which have these goofy physical gags but also abound with r
Post a Comment
Read more